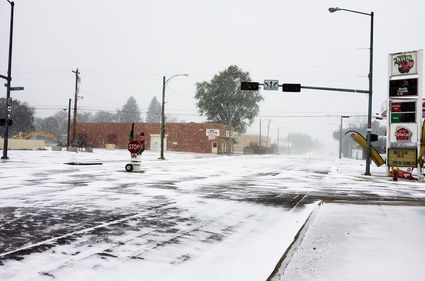 Last week's power outage forced city road workers to place a stop sign in the middle of the intersection of 3rd and Chestnut streets because the the traffic light wasn't working.

The Farmers' Almanac might be onto something with its forecast for a frigid and snowy winter in these parts.

The first winter-like storm of the season, which blasted the Panhandle last Thursday, knocked out electrical power for about 80 percent of Kimball and dropped temperatures from 64 to 21 degrees days over the previous 20 hours.

Old Man Winter unleashed less than an inch of snow locally during the storm, but he still flashed that mean streak that local folks remember from those nasty blizzards during the last snow season.

Like last winter, gusts in the area of Kimball County Road 32 on the south side of town caused power lines to flap violently enough Thursday morning to interrupt the city's electrical service.

"That's what caused the flickering, and then the power went out," City Administrator Dan Dean told the Observer.

That outage lasted from about 8:15 to 9:20 a.m. Thursday, Dean said. Some residents also experienced shorter power interruptions overnight leading up to the outage.

City crews and linemen were dispatched quickly to CR 32 to restore power that the strong north winds took away. The city also placed a stop sign in the middle of the intersection of 3rd and Chestnut streets while the traffic light there was out.

Not even a few hours later, Kimball took another hit.

Dean said a damaged power line near Sidney just before noon caused an outage here in late morning and early afternoon before power was restored for good.

It appears that more severe weather will have to wait in the Kimball area at least until after the weekend.

The forecast calls for sunny or partly sunny skies through next Monday except for a cloudy Sunday. Temperatures were expected to range from a high of 79 on Thursday to a low of 30 early Sunday.