The Seeds Have Been Sown

Farmer's Day 2019 Is In The Books With Some New Twists 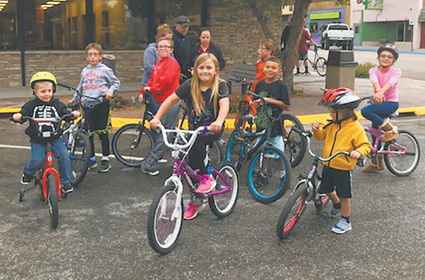 Kids who participated in a new Farmer's Day event this year, the bike race, may have helped start a tradition for years to come.

The theme for the 2019 Kimball Farmer's Day celebration was "Sowing Seeds of Success."

That phrase may apply to the event itself.

Some new events this year, such as the bike race and cornhole tournament, worked out well and are worthy of growing, Farmer's Day chairperson Assunta Nelson told the Observer.

Nelson said the Farmer's Day Committee held its wrap-up meeting last week. She said the committee did a "bang-up job" this time around.

"I think things went really good," she said. "I mean, it's such a big community event and there are so many people involved. We're really lucky for the community involvement we had."

Even the damp, cooler weather on Saturday came with "a silver lining," Nelson said. The way she sees it, the weather might well have convinced more folks to explore the great indoors at the museum and the Kiwanis Craft & Vendor Market. Both places enjoyed strong attendance.

Meanwhile, the Farmer's Day honoree as this year's "Outstanding Farmer" was local custom cutter Nate Magninie, owner of Magninie Harvesting. You didn't have to go far to find someone who thought he was most deserving of the award.

Like the other 2019 Farmer's Day dignitaries, grand marshals Dave and Susan Haack, Magninie was presented an engraved silver plate.

The person who nominated Magninie, whose name was kept confidential, had this to say about the man:

"He's a 'homegrown' boy who chose to make Kimball his home, raising his family here. He has a custom farming and harvesting business, which he's operated for many years, and he invests in local young men for his labor force, giving them the opportunity to remain in Kimball and raise their families here also.

"Nate has two children, Tyler and Sheridan. He is married to Dee Martin-Magninie, a wonderful nurse at Kimball Health Services." 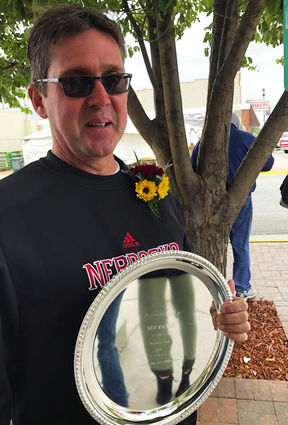 Over at the Gotte Park horseshoe courts, the Saturday and Sunday tournament participants had their own guys to commend for a job well done. They thanked Red Knights Motorcycle Club members for "selflessly" taking time from their lives to upgrade the horseshoe courts and fencing for the 2019 competition.

"We're always open to suggestions for next year," she said, "and people can always contact me or other committee members."