Potter-Dix, Kimball Do Battle In Volleyball 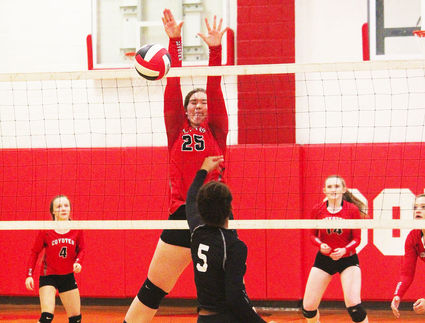 Potter-Dix junior Mikayla Lee puts up a block against Mitchell during the Potter-Dix Triangular on Thursday.

Potter-Dix's Lady Coyote Volleyball team hosted a triangular meet against Mitchell and Kimball last Thursday, and came away with a split against the Panhandle rivals.

The second set started similarly, with Mitchell building a 9-to-1 lead, but the Lady Coyotes were finally able to get some momentum to string together a scoring run to eventually end the set with a 25-to-14 loss. The Lady Coyotes had trouble setting the ball and had few kill opportunities against Mitchell's strong defense and experienced roster. For a team with new faces in the lineup, the program has developed their talent well and the girls were ready to slot into their roles as soon as the opportunity presented itself.

Mitchell then went on to face the Kimball Lady Longhorns with similar results, although the Kimball squad put up a fight in the second set, falling 25-to-17. It was Mitchell's fifth win in a row against Kimball since 2015.

The Lady Coyotes and the Lady Longhorns faced off in the final match, with the Potter-Dix girls stumbling at first but then tying the set and battling the whole way through. Ginny Herboldsheimer and Jayden Shoemaker provided the offense and defense, and the team played together well and took advantage of Kimball errors to build a lead. Kimball fought back, but Mary Kasten was able put away the set 25-to-18 with an ace serve.

Kimball rebounded and again matched the Lady Coyotes and pulled out to a big lead in the second set. At 15-to-5, Potter-Dix made a comeback, pulling to within 17-to-20 and putting pressure on the Lady Longhorns. But Kimball refocused and was able to get the final points to take the second set 25-to-20. This set up a final set that was evenly matched until at 9-to-9, Potter-Dix went on a run and scored 10 unanswered points to put the Lady Coyotes up 19-to-9. Kimball finally broke the scoreless streak, but it was too little, too late as the Lady Coyotes took the third set 25-12. Kendal Nielsen lead the offense with eight kills.

Potter-Dix Head Coach Corey Micheman was pleased with the results, saying, "After a 13 day layoff we were definitely a bit rusty and Mitchell gave us a rough time to start. But we matched up better with Kimball, and our seniors Makayla Williamson and Ginny Herboldsheimer showed great leadership to keep the team together after the loss to Mitchell. It was nice to get production from the bench, as all 12 girls that suited up got playing time and contributed to the win against Kimball. We're going to continue to work hard and improve."