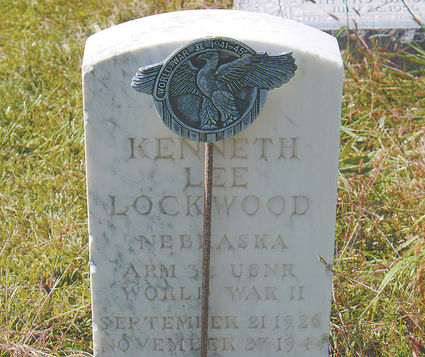 The grave of Kenneth Lee Lockwood is located in Section 1 of the Kimball Cemetery. The old Observer photo below shows Navy Ensign Lockwood, 18, who was killed during Navy training in a plane crash in central Florida on Nov. 27, 1944.

The story of Kenneth Lee Lockwood started and concluded in Kimball as he was laid to rest in the Kimball Cemetery in December 1944.

But a new chapter is unfolding as a museum is researching the World War II era military accident that claimed his life.

The rear cockpit contained several flight instruments, notably a device called an altimeter because it was the radio-gunner's job to call off altitude during the dive as the pilot was focused on aiming the plane to deliver the payload.

Lockwood and his pilot, a Navy incident report reads, were engaged in tests for A/S (anti-submarine) bombing on a water target on Lake Dorr. A tragic twist of fate there, in central Florida, would cut short the life of the young Kimball man.

"The surface of the lake was very calm, and had a glassy appearance, making it very difficult to judge altitude when flying low over it," the report states. "The pilot was observed to make a normal approach in about a 20 degree dive, and bomb the target at about 100 feet altitude."

The pilot, Ensign Robert Clawson, and Lockwood were flying an SBD (Scout Bomber Douglas) World War II aircraft over this lake. This aircraft was manufactured by Douglas Aircraft from 1940-44 and was a naval scout and dive bomber.

They were on a training mission to bomb submarines and crashed.

"The pilot ... started to pullout of the glide, but struck the water slightly nose down," the report explains. "Plane then bounced a few feet into the air then crashed into water, sinking in about 30 seconds. It is believed by the board that the pilot misjudged his altitude, causing him to pullout too late."

As a recommendation, all pilots were instructed to "check their altimeter as an aid in preventing low pull-outs when bombing water targets."

Both bodies were recovered in the days following the crash, but the wreckage was left submerged in Lake Dorr.

The DeLand Naval Air Station Museum in DeLand is working to recover the aircraft. The museum says it would like to locate any of Lockwood's living relatives "so we can inform them of our current investigation. We would like to let them know Ensign Lockwood will not be forgotten."

The Western Nebraska Observer dated Nov. 30, 1944, reported the sad and tragic news of Lockwood's death to the community of Kimball. The article said his body would be returned to Kimball for burial.

A week later, the Observer reported that Kenneth Lee Lockwood was laid to rest in the Kimball Cemetery.

"He enlisted in the Navy in January 1944 at Oakland, Calif., and was sent to the naval station at Farragut, Idaho, for boot camp training. From there he was sent to Memphis, Tenn., for radio training after which he was sent to gunnery school at Purcell, Okla. At the time of his death, he was taking his finishing training at Deland, Florida."

Now, on Sept. 19, 2019, the Observer has more to report about the young man who lost his life serving his country.

Wilma Lockwood from Bushnell told the Observer that Kenneth was her husband's brother. She and her husband, Robert, attended school in Bushnell when Kenneth died. Robert, who died in 1995, was two years younger than Kenneth.

Kenneth also had an older brother, Lyle Lockwood, who resided in Casper, Wyo., according to Wilma.

The Observer has obtained a copy of the crash report and video footage of the submerged aircraft, which is in the process of being recovered. 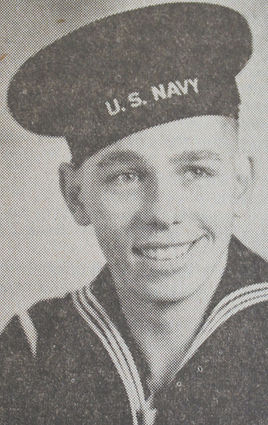