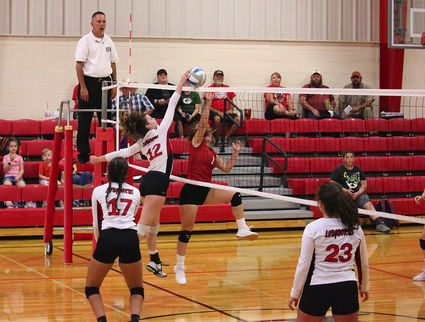 Longhorns junior Sydney Biesecker stretches to tip the ball over the net in the game against Hemingford.

We are off to a 1-1 start with lots of games coming up on the next two weeks.

I was pleased with the girls staying composed under a trying circumstance.

Megan Spicer our returning starter and setter was ill. Ali Andretti, our foreign exchange student from Italy, stepped up and played hard.

Sydney Biesecker and Jenna Greenwood were our leading hitters. Jenna led the team in service points against Hemingford with 13 with Amy Birkhoffer and Ali both scoring 7.

Against Gordon-Rushville Amy led the team in service points with 6. Sierra Rutledge is really starting to settle into the Liberian...