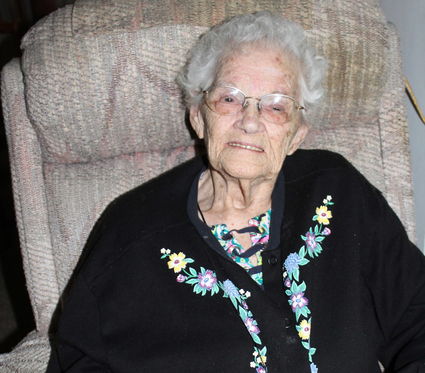 Maxine James of Kimball turns 103 on Sept. 11. It will be a fine day to sit, sleep and watch some TV.

Looking back on her life, Maxine James put it simply, "I have enjoyed life, no complaints. I have my health; you've got a lot if you have your health."

She was born in York, one of 11 children. Although she was one of the younger children, her remaining sibling have all passed away, as well as her husband and both of her children.

Maxine still lives by herself. Although she gave up driving in 1998, she still likes to go places but has to rely on other people to take her. She still fixes her own meals.

Maxine and her husband, Neal, owned the locker plant in Kimball from 1948-79. Maxine was way out in front of the the women's lib movement as she worked in the locker plant full-time from start to finish.

"That was hard work, that was probably the hardest work I have even done." "It was just Neal and I to begin with then, but then were able to get help, we had good help."

She blames the locker plant for her arthritis in her hands.

A deep respect and true love for her mother is evident as Maxine talked about her life. Without hesitation, Maxine explained that after 11 kids her mother and father divorced and her mother raised all 11 children with no help except $40 a month and 2 quarts of milk from the state of Nebraska.

She does stress that everyone worked to contribute to the family.

Her favorite story about her mother was when the four younger children, including herself, contracted tuberculosis. The doctor wanted to send all four to Kearney to the tuberculosis hospital. Mom wouldn't have it.

"My mom took care of us," Maxine said.

She told the doctor, "You let me take care of my kids, I will get them over this." And her mom did just that, but it took a year and the kids were confined to a screened in porch, summer and winter.

"I had the best mom in the world," she said. "We never had much money but she could stretch a dollar further than anyone I know. She was a special lady."

Reading used to be a great hobby for Maxine, but now she said she just sits, sleeps and watches TV.