Friends Come To Rescue For Wasielewskis, Help Save Their Harvest 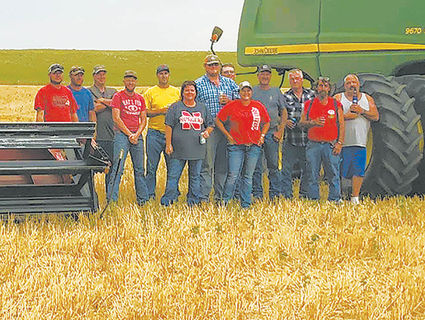 The Wasielewski family has some darn good friends who came to their rescue after a challenging harvest fire. In the front are Lane, Brandie, Monica and Keith Wasielewski. Some of the individuals who helped to finish harvest for the family are Charles Culek, Klent Schnell, Randy Modlin, Jed Johnson, Kevin Shoemaker, Bob Bowland, Doug Lukassen, Kent Wasielewski and Stacey Daily.

The day began like a normal harvest day for the Wasielewski family.

The farm family has always worked together to harvest their own wheat. Brandie Wasielewski was driving the combine while daughter Monica was in the grain cart and Keith was driving the truck. Lane was off fixing fence.

They began cutting wheat at about 10:30 that morning. The field was close to their house, about 9 miles north of Bushnell.

Not long after came the disaster. It was about 2 p.m. in the afternoon

"We had just dumped on the go," Monica recalled.

After that, she said she was looking at her phone.

"Mom (Brandie) went around the corner," she said. "I could still hear the machine running and looked up. It (the combine) was fully engulfed in flames. I missed the first initial flames."

When Monica looked up from her phone, she saw her mom standing outside of the flaming combine and was yelling at her to call her dad. Monica said she instantly started bawling.

"Mom was fine, completely OK," she said. "She even saved her phone and her coffee cup."

But Monica was emotional as it had already been a stressful harvest.

"Because of the weather, it had been so cool that the moisture and humidity were too high to cut and when it would go, it would start raining," she said. "The day the combine burnt was the first day that we could cut for longer than an hour, and that's about how long it lasted before the fire."

Emotions got the best of her.

"I couldn't help but to shed some tears as I had NO idea how we were going to finish this already stressful harvest," she said.

Keith was hauling a load of seed wheat to the house. After he got the call from Monica, he jumped on a four-wheeler and headed to the smoke. He tried fighting the fire by shoveling dirt until the Bushnell Fire Department arrived, and then the Kimball Fire Department showed up.

They lost, of course, the combine and about 8 acres of wheat, but they know it could have been so much worse because the fire was contained to one field.

Keith's assessment of the cause of the fire was that it occurred in the engine compartment in the PTO housing of the International combine.

The fire departments completed their work and left by about 4:30 that afternoon.

Then it was back to work.

Monica and her mom headed off to haul water to their cows, still a bit shaken.

But that is not the end of the story. The best part was yet to come.

Monica had no idea that their friends and neighbors would come to their rescue.

Bushnell area neighbor Randy Modlin was the first to show up, back out at the Wasielewski farm by 6:30 p.m. with his combine, and several more area producers were to follow. Charlie Culek, Doug Lukassen, Klent Schnell and Travis Cook showed up with combines.

Others helped with trucks to get the wheat to town, including Kevin Shoemaker, Jed Johnson, Garrett Purdy, Skip Kelly and Kip Shoemaker. 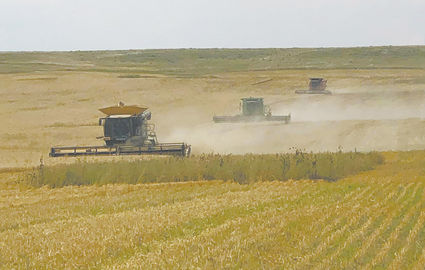 Area producers take their combines on an emergency run to help the Wasielewskis finish their harvest that was interrupted by a fire.

Todd and Karla Wilke stepped up to cut the Wasielewski's wheat in the Dix area. Kent Wasielewski was the official grain cart operator.

The Wasielewski family was appreciative and humbled as their friends and neighbors came to help them finish their harvest.

Monica posted her feelings online early the following morning: "I never thought it would be us."