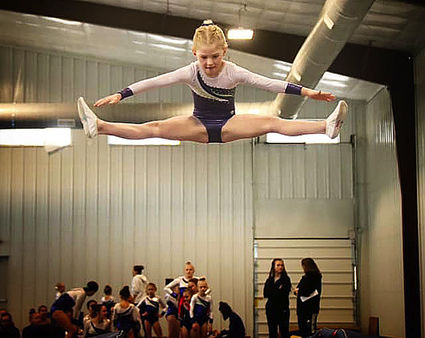 It's all about form and having no fear of heights if you want to perform at the national level in power tumbling, and that's what 8-year-old Breckyn Kiefer of Kimball did recently when she brought home her share of honors from the National meet in West Palm Beach, Fla. In this photo, she gets some serious hang time during a meet in Scottsbluff.

Breckyn Kiefer, the 8-year-old daughter of Wade and Brooke Kiefer of Kimball, is making a name for herself in the world of power tumbling. Not only on a local, or even state status, but all the way to National recognition!

When Riley McNees came to Kimball and started a tumbling program, Breckyn joined the fun at age 5 and has now been involved with the sport for three years and competing for the past two years.

The talented little blonde has always been athletic, according to her mom.

"She was tumbling around as soon as she could walk, and at age 3 she was doing back flips and walking on her hands and trying all kinds of things," Brooke said.

Her love for the tumbling nights turned to a "hate attitude," however, when coach McNees left town and she was without her coach.

"It truly turned into a love/hate thing" said Brooke.

But – thankfully – Mom got things turned around, mainly by taking over the position of coach and keeping the program going in Kimball.

"I didn't want to see the program fold and the kids who were interested left without it," she said.

It took a while as Breckyn pouted and was angry and didn't even want to go to practice, but thankfully it all worked out as her love for the sport came back.

This year Breckyn was in six regular season competitions, including State at Gering, where she qualified for Regionals in the three events she competes in, which are floor, trampoline and double mini.

The Regional competition was held May 2-5 at Santa Clara, Calif. At this time, she was only qualified in two events for Nationals, which were trampoline and double mini, and Breckyn was very upset because floor is her event of passion.

She managed to qualify for National floor at the Regionals, bringing home the first place floor championship at Regionals, which qualified her for Nationals in the event.

"So we were headed to Florida, and she had accomplished all of her goals," Mom said. "Bringing home a Regional championship is an amazing accomplishment at 8 years old."

Even more so when you realize she was competing at level 5 against 9 and 10 year olds!

I certainly agree with her mom in her assessment that winning Regionals at 8 years old is an amazing accomplishment. As I interviewed Breckyn and her mom in their home, I was also amazed at how focused and on board Breckyn is with everything about power tumbling. She slyly announced she would some day like to compete in the Olympics.

Next up for Breckyn is a Mega Meet in Vegas on Jan. 23 weekend. A lot of credit needs to go Brooke Kiefer's way, too, as she kept the tumbling program alive in Kimball and coaches around 50 kids on Monday, Tuesday and Wednesday evenings in the gymnasium located in the Plains Historical Society museum building, once known as the Kimball School facility.

She has kids from Kimball and our immediate area, along with kids from Pine Bluffs, and Sidney, even from Peetz, Colo., from time to time, and Scottsbluff kids have come to Kimball to work on some of the equipment before competition.

I asked Brooke if she had an assistant. 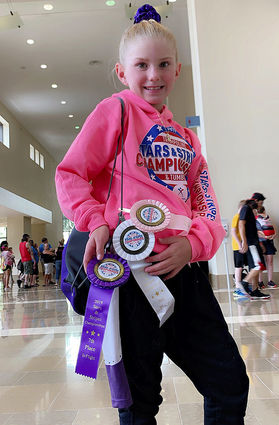 Breckyn Kiefer displays her array of ribbons from the national meet for the power tumbling form of gymnastics.

If there are any good folks out there with an interest in giving Brooke a hand, then give her a call, or just show up and ask what you can do to help. Although there are around 50 kids who come to the workouts, at this time only five are going to competitions.

It certainly involves some traveling as most of the regular season meets are in Colorado, and then there are the long trips if you qualify for Regional or National.

By the way, Breckyn informed me that she was 8 years old but she was having a birthday Sept. 1 and will then be 9 years old. Here is a early Happy Birthday from me, Breckyn.

Now with 29 medals in your possession already, go get some more to add to that special medal holder your dad built for you. I sure hop he built a big one because I think you are going to need it!