By Dakota Kuhns
The Observer

EYE ON THE PRIZE

Kimball Deadeye Shooters Zero In To Place 44th in USA 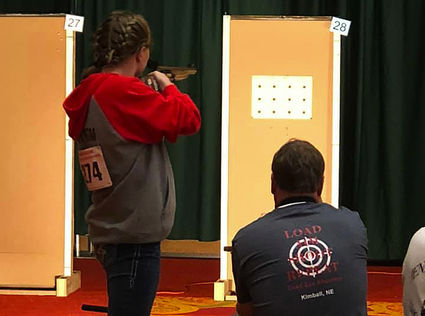 Julia Winstrom of Kimball lines up a shot this month on her standing position target at the Daisy National BB Gun Championship Match in Rogers, Ark. Julia placed second overall in the standing position with a score of 96 and six centers.

Kimball Deadeye shooters placed 44th in the nation out of the 64 teams in competition at the Daisy National BB Gun Championship Match in Rogers, Ark.

Once again, the team was made up of Julia Winstrom, Nolan Cook, Jessica Terrill, Chris Foster and Cody Brinkman.

"Our team needs to work more on our test scores and get them up, but overall I think the kids did great and we had a lot of fun," Deadeyes coach Nicole Snyder said.