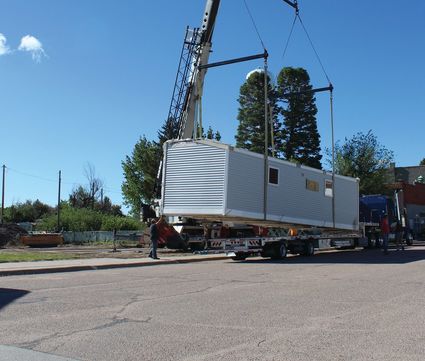 A large crane lifts one section of the new Dix Post Office off of a semi and places it on a concrete slab. The location of the new post office is directly east and across the street from the old, abandoned post office.

Three and a half years after the U. S. Post Office in Dix was closed due to mold and structural issues, a new post office building has been set down and is expected to open in late July, although no date has officially been set for the opening.

In a few short weeks, Dix will once again have a full service postal site.

In an era when many post offices nationwide are downscaling or shutting down, Dix has beaten the odds. It has gained a new post office facility.

"Historically," according to Kimball Postmaster Karen Miller, "when a post office is closed they usually don't reopen."