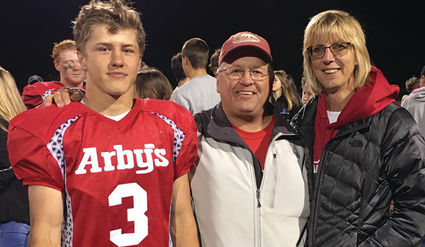 Lynn Anthony For The Observer

Kimball's Zane Anthony poses with his No. 1 fans, parents Lynn and Theresa Anthony, following completion of the West Nebraska All Star Football game Saturday night at Bearcat Stadium in Scottsbuff. Anthony and his West team won over the East, 6-0, in a defensive battle.

Kimball High grad Zane Anthony made sure he closed out his High School football career in fine fashion with an outstanding performance in helping his West Team win over the East Team, 6-0, Saturday night at the Scottsbluff Bearcat Stadium.

Anthony started on offense for the West Team as a wideout receiver, and also played a role as a defensive specialist on kick off situations.

Zane had a kickoff return of 33 yards, had three catches for 22 yards, and had three tackles on special teams.

Anthony said, "I had a great time and enjoyed every minute of our practices, and the game, and it was a...