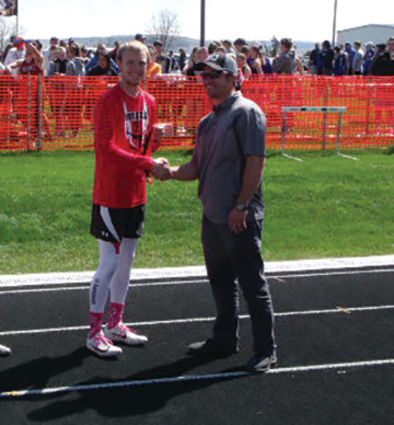 Kimball's Brady Kilgore receives his award for Most Outstanding Male Athlete at the Bayard B-C-D Track Invite and was also awarded a special "Top Hurdler" award in memory of the late Jim "Hondo" Hohnstein, a coach and teacher at Bayard High School and an avid hurdler in his day.

Brady Kilgore won two of the top awards handed out at last week's B-C-D Track Invite along with winning both hurdle events and placing in all four events he was in.

The talented senior from Kimball High was voted Most Valuable Male Athlete by virtue of his performances on the day and also was given the Jim Hohnstein top hurdler medal.

This award was in honor of the former Bayard High coach and former outstanding hurdler who passed away after a battle with cancer.

Top team honors went to Sidney in both the girls and boys divisions.

The class B powerhouse won the boys team title with 174 p...