Kilgore Best Of The Best In The West 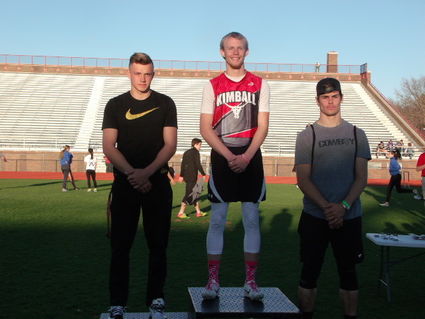 Brady Kilgore stands tall on the medal platform after winning the 110 meter hurdles at the Best in the West Track Classic. Brady's winning time was 15.15, while Luke Rohrer of Scottsbluff was second in 15.23 and Bryan Lemmon of Torrington ran third in 15.26. The Horns also placed an impressive third at the SPVA meet. See story, Page B8.

Brady Kilgore did not disappoint and kept his win streak in the 110 meter high hurdles alive by winning at the Best in the West Track Classic held this past week at the Scottsbluff High School Stadium site.

The talented Kimball High senior won his favorite event in 15.15 seconds and came from behind to get the win in a tight race among the top three.

An exciting night for Kimball's Zach Wagner, who had the 7th best qualifying time of the 8 runners in the 800 meters of 2:13.18, but blasted out to a new person best time of 2:05.28 to finish second and win the silver medal.

Kimball junior Beau Hanks never got close to his season best jumps in the triple jump and had a best of 37'11.5" at the Best in the West.

He will be back again next year