Moisture Needed In Panhandle, At Least Before Storm 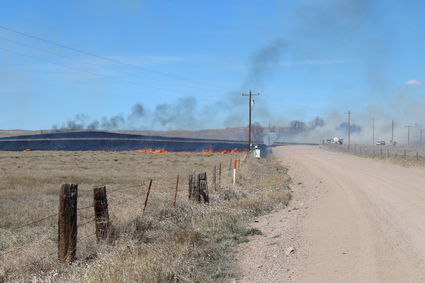 This grass fire burned about 60 acres of pasture land near Kimball before the April 10-11 storm that brought a blizzard warning to the area.

An estimated 60 acres of pasture burned on Sunday afternoon, April 7, near Kimball, according to Kimball Fire Chief Rick Wynne.

The fire along Road 29W, which occurred before the April 10-11 storm that brought a blizzard warning, was created by a downed power line and pole.

About 10 to 12 firemen responded while the wind continued to whip up the flames.

Wynne explained how the Kimball Volunteer Fire Department used its two grass trucks, which hold 450 gallons of water and have nozzles on the front.

"We can just go down the fire line and spray," he said.

Until the grass turns green, grass fires will continue to plague the area.