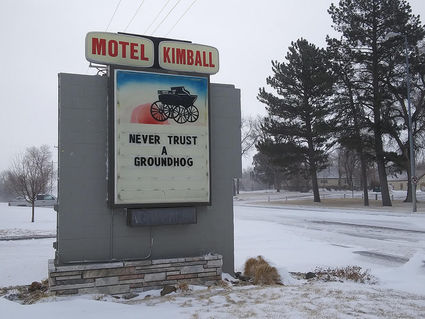 Groundhog Punxsutawney Phil's prediction for an early spring was all wrong, inspiring Motel Kimball management to advise 3rd Street motorists during this week's blizzard to "never trust a groundhog." The city of Kimball declared a snow emergency.

The Blizzard of 2019 walloped the Kimball area with wicked sustained winds, freezing rain and heavy snow as forecast – forcing the closure of schools, businesses, government offices and highways across the Nebraska Panhandle.

The shutdown of Interstate 80 and Highway 30 on March 13 and 14 due to hazardous conditions made it impossible for copies of the Observer to be brought in from Cheyenne, Wyo., where the paper is printed.

Every effort will be made to deliver papers to local businesses for single copy sales on Friday, March 15, and to the U.S. Postal Service for mail delivery to subscribers.

The Observer thanks all readers for understanding the situation – and for reading your hometown paper. 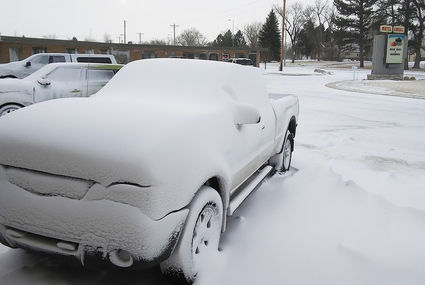 Snowdrifts of several feet were common around Kimball in the aftermath of the historic March 13-14 blizzard. These vehicles were parked at Motel Kimball, where their owners spent blizzard night in the classic midcentury designed inn along the Lincoln Highway.