Dauminator Adding To His Legend 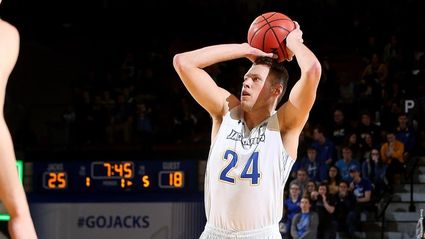 They love Big Mike at South Dakota State, and he keeps giving them reasons to do so.

And Mike Daum continues to add on to the legend he is building in his illustrious collegiate basketball career at South Dakota State. A pair of big wins came this past week, in which he was the spearhead, as he piles on more points and more rebounds.

In a Thursday night 92-83 win over Purdue Fort Wayne, Mike had 38 points and 20 rebounds. He was 4/8 on three point attempts and 8/11 at the line, had three assists, three steals, and a personal career high of five blocked shots.

On Saturday against South Dakota, Mike saved the day with his scoring in the final seconds. With the Jackrabbit's trailing late in the contest, Mike scored the go-ahead basket, and then went six for six at the line to clinch the 94-89 victory.

Among his latest accomplishments is surpassing the 3,000 career point mark, moving him into the top ten of Division 1 players to accomplish this feat. The latest big-time name he went by is Oscar Robertson.

Mike has now scored 3,008 points and now has this Saturday's final regular season game, on his home court – and it is Senior Recognition Night! This would be something to see as the Jack fans love their big guy.

He also set a new league career rebounding record, and now has 2,014.

The Jacks need to secure another win Saturday, and then capture the Summit League Tournament Championship to put them back in the NCAA Tournament for his fourth time so he can continue to add to his legacy.

Not much more to talk about on the local scene as the winter sports are concluded and spring sports season arrived this past Monday with state permission to begin practice.

For Kimball, that is boys golf, and track and field.

I am certain that Coach Chad Wise is maybe going over the rules, etc., as the golf course is not open for play. It is too cold for doing much outside for the tracksters, or golfers, so maybe it's time for some conditioning inside the school.

The first track meet for Kimball is the indoor meet at Chadron State College on March 16, and the first golf tournament on the schedule is April 9 at Mitchell.

Next week we will try and give you season ending recaps on the basketball season for both girls and boys, and also the final stats for the wrestlers.