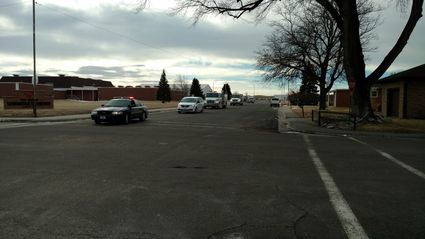 An escort the two seniors will never forget: McManigal and Cluff were escorted out of town by the KPD as well as the KVFD -- lights blazing and all last Wednesday.

Jordan Cluff and Toby McManigal, Kimball High's two state qualifiers for the 2019 Nebraska State Wrestling Tournament, failed to make the medal stand at Omaha, but can add the experience to their list of athletic accomplishments at Kimball High.

Cluff, a senior, who was making a repeat trip to the big show, garnered one more win but suffered two losses as well, ending his season at 26-11. In his first match Jordan won 11-10 over Reeves of Battle Creek in his 113 pound weight division, then lost 14-4 to Mueller of Logan View, and lost 11-10 to Vondra of Boone Central-Newman Grove.