Jordan Cluff, Toby McManigal In An Omaha State Of Mind 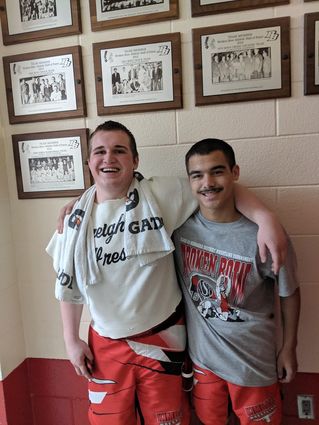 Brothers in arms Toby McManigal, left, and Jordan Cluff are the pride of Longhorn Nation as they prepare for the State wrestling tournament in Omaha.

Kimball will have two wrestlers involved in this year's Nebraska State Wrestling Tournament being held this weekend at the CenturyLink Center in Omaha that starts today (Thursday).

Jordan Cluff, a senior, who was also a state qualifier last year as a junior and won two matches at the big show a year ago, will be joined this year by senior teammate Toby McManigal who is making his first state appearance.