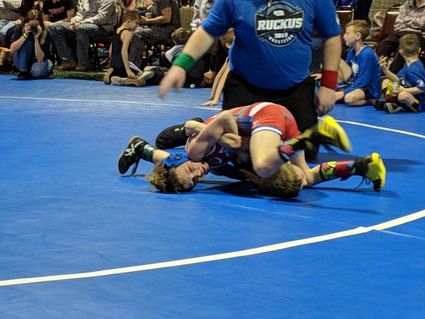 Four of Kimball's wrestlers were picked for dual teams outside the area, as was one wrestler from the Tri-State Grapplers. They were Matthew Johnson, Trey Schindler, Camron McGinnis and Britton Culek, along with Cable Botha for the Grapplers.

Teams were made up of 14 individual wrestlers from all over the United States. One wrestler was chosen for each weight class, and the wrestlers were then placed into to pool brackets.

What a great opportunity for young wrestlers to be coached by some of the top coaches and to meet new kids from different states.

Kimball came in 9th out of 40 teams with 91 team points and the Grapplers were right behind in 10th place with 81.5 points.

Kyle Thurin of the Grapplers made the trip to Riverton, Wyoming, last weekend to compete in the Ron Thon Memorial Varsity tournament.

Kimball Wrestling Club will host its wrestling tournament this coming weekend Sunday, Feb. 3, at Kimball High School. Nearly 250 wrestlers are expected to be in attendance. On average, each wrestler will bring three to five spectators to this event.

Doors open at 8 a.m. and matches begin at 9 a.m. Everyone is invited to come cheer on the local wrestlers from Kimball Wrestling Club, Tri-State Grapplers and the Banner County MatCats.

Concessions will be served all day.