Kimball Takes Step To Save Or Raze Longhorn Restaurant Building 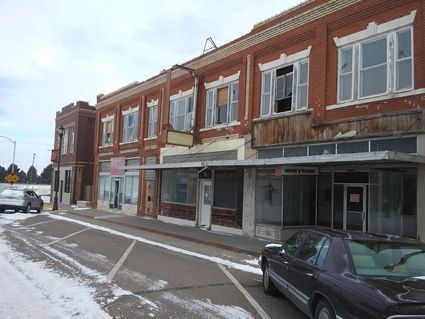 The city of Kimball is trying to save the historic Longhorn Restaurant building. It's a challenge.

Should it stay or should it go?

The future of Kimball’s historic but rundown Longhorn Restaurant building apparently will be in the City Council’s hands as soon as it officially gains possession – and now the council has access to $100,000 if needed to help do whatever it deems best to do with the place.

The council voted, 3-0, on Jan. 15 to accept the Kimball Loan Advisory Committee’s recommendation to use up to $100,000 in economic development funds to prepare the vacant Chestnut Street building for possible future business and residential use – the much-preferred option – or demolish it.

City economic development funds would support the effort, and a federal grant would be available to help defray expenses, City Administrator Dan Dean told The Observer.

At this point, the city seeks proposals about what to do with the brick building that once housed a JCPenney retail store. Finding a business-minded buyer is on the top of the wish list.

“We would like to see some business on Chestnut,” Dean said. “That’s what it’s all about. We hope to find a responsible party to own it and rebuild.”

Dean also said he’d like the city to fix the building’s broken windows in some way and abate the building of dangerous asbestos, which could cost an estimated $20,000. He said the “precarious” overhang out front is another concern.

As unsafe as the Longhorn building has become with a leaky roof, broken windows and an interior in disrepair, the structure has what some might consider “good bones.” The once grand architecture hints of more glorious times inside the doors.

“I like the bricks and so forth,” Dean said.

Before the city can do anything more than examine the process for preparing the building for its next step, it must gain possession of it. The owner, the Perry family trust, has expressed desire to hand it over to the city, but the transaction has yet to occur.

The trust has no interest in the building and has stopped paying taxes on the property, Dean said.

One plus of the city acquiring the building is avoiding possible future legal expenses regarding what its owner should do with it, Dean said.

On the other hand, the fact that Kimball has not gone through a property acquisition process such as this before means that the city must proceed carefully to set a strong precedent, Dean said.

“It’s going to take time, and we’re going to have to be patient,” he said.