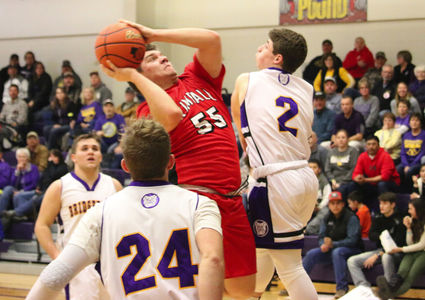 DREW BEISECKER / FOR THE OBSERVER

The Kimball boys lost to Bridgeport 47-24 in first round play in the SPVA Conference Tournament on Monday night, dropping them into the losers bracket while No. 2 seed Bridgeport advanced into the winners bracket.

Kimball, the No. 7 seed, won the first half leading 10-2 at the quarter break and 13-11 at half time, but in an almost exact replay of their meeting this past Friday evening, it was all Bulldogs in the second half as they outscored the Longhorns 22-6 in third quarter play and 36-11 in the second half.

Bridgeport had its problems early with lots of turnovers and poor shooting, but then it was Kimball's turn to exhibit those same problems as its only points scored in the second period were on an old-fashioned 3-point play by Izaac Reuter.

In the third quarter, the Horns were held to 6 points and in the final period of play they failed to score a field goal, netting five free throws.

The winners shot 42 percent from the field, hitting 18 of 43 shots.

The Bulldogs also won the battle on the boards, pulling 40 rebounds to Kimball's 16 total. Other team stats for Kimball saw the Longhorns chart 14 steals, 4 assists, 18 turnovers and 18 fouls.

Brendan Walker was high scorer for Kimball with 6 points, followed by Beau Hanks with 5, Corey Travis 4 (going 4 for 4 at the line), Izaac Reuter 3 along with a team high 7 rebounds, Sam Cajero 3, Brayden Tyan 2, and Zane Anthony 1 plus a team leading 5 steals.

Luis Garza, the 6-2 sophomore, was high for the winners with 16 points, all scored in the second half. Drake Demasters, the 6-5 senior, had 15 points, Kaleb Lussetto 7, Logan Nichols 6 on a pair of treys, Mason Nichols 2 and Cole Faessler 1.

Kimball was without the services of senior Brady Kilgore, who was still sitting out recovering from a hip pointer, but he should be ready to go later this week.

Jacob Withrow was suited but limping and saw no playing time.

Kimball will play this evening (Thursday) in the losers bracket against Perkins County in the 4 p.m. Mountain time game at the college in North Platte.

Perkins County was the No. 6 seed and lost to No. 3 seed St Pats, who will now face Bridgeport in the winners bracket tonight.

A win by Kimball over Perkins County would advance them into the first game on Saturday to play for fifth place, while a loss tonight eliminates them from play.