Cluff And Rohde Runers-Up At Imperial 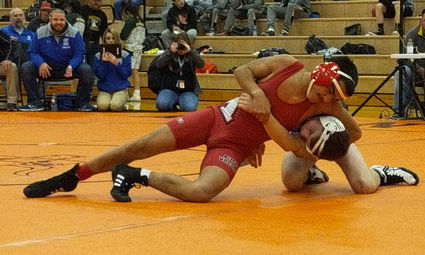 JULIA McGINNIS / FOR THE OBSERVER

Jordan Cluff and Izaak Rohde highlighted Kimball's efforts at the Chase County Invitational Wrestling Tournament this past Saturday as both went 4 and 1 on the day and finished in second place.

Rohde also went 4-1 on the day and had 2 pins, a major decision of 13-5 along with his other win before losing by fall in the title match.

Stephen Bateman at 285 was 1-2 in his three times on the mats, registering a fall in his first match before losing twice by falls.

"We had six wrestlers compete at Chase County as senior Toby McManigal was ill," coach Wade Brasher said. "Jordan Cluff had another solid outing, losing in the finals to state ranked Murillo. Jordan needs to be more offensive to win these big matches.

"Izaak Rohde went down weight classes to wrestle at 182 for the first time. Izaak has constantly improved since he came to Kimball midseason last year.

"Chris Barker, a first year wrestler, was able to notch his first two wins of the season. Stephen Bateman wrestled well in his first two matches, losing a close one to the number one seed in round two, but experienced a disappointing result in his consolation match."

The Kimball Longhorn wrestling team will be back in action this Saturday at the Dogger Tournament in Lingle, Wyo.