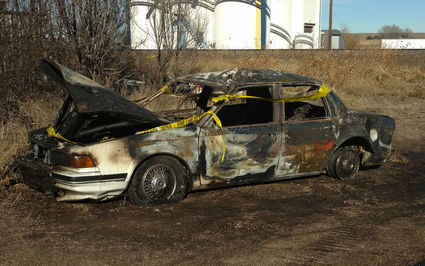 This is how a car destroyed by fire in Dix on Jan. 4 looked the morning after.

A fire of suspicious nature on Friday night, Jan. 4, destroyed an automobile next to a carport on the north side of U.S. Highway 30 in Dix, the Dix Volunteer Fire Department reported.

Dix firefighters said a Nebraska State Fire Marshall's Office investigator concluded that the blaze was not accidental or naturally occurring. The fire appeared to have started in the passenger area of the vehicle, identified as possibly an early 1990s Buick, and not near the engine or battery.

The call came across emergency radio for the Kimball Volunteer Fire Department. The car was soon discovered to be fully engulfed in flames. Both fire departments worked together.

Oddly enough, Dix's tornado siren went off during the incident due to a dispatching mistake although it was a clear winter night.

The car's owner was not identified.