School Board Back To Business 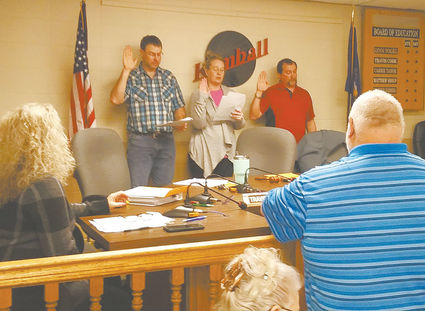 Sworn into office were re-elected Matthew Shoup and Lynn Vogel and new member Travis Cook, who before the meeting made the rounds throughout the boardroom welcoming all in attendance individually.

In another significant leadership decision, the board approved Superintendent Elizabeth Owens' contract terms quickly, unanimously and in routine fashion. The contract is for two years -- July 1, 2019, to June 30, 2021. The first year's salary is $140,000. The board will set the second year's salary at a later time.

In the meeting's longest discussion, Owens and the board talked about improving parameters for summer weed control, lawn fertilizing, mowing and trimming on district grounds. Football field weed control is a particular concern.

Last summer, local contractor Mark Anderson handled all lawn care responsibilities. For the future, the district is considering a contractor doing weed control and fertilizing, and the district handling mowing and trimming.

"We believe we have the equipment in place to handle it," Owens said.

Owens said the district would like to do a more comprehensive job of mowing at a lower cost. One idea is the district hiring a part-time employee to mow 20 hours a week at $10 per hour.

Meanwhile, board members and educators in attendance applauded more than two dozens students at Mary Lynch Elementary and the junior/high school for an array of accomplishments as part of the recognition program "Celebrating Student Success."

In other business, the board:

-- Moved a proposed policy change to a second reading regarding certified staff force reduction due to such factors as budget considerations, declining enrollment, board decisions to end or alter a program, or reduced or terminated state or federal funding for a program.

-- Moved a proposed policy change to a second reading regarding nonresident students and option enrollment.

-- Special board meeting at 8 a.m. Feb. 1 in the district office to address an early retirement package offered to staff that's named the Voluntary Separation Incentive Agreement.