City Repairs Wind Damage ON its own 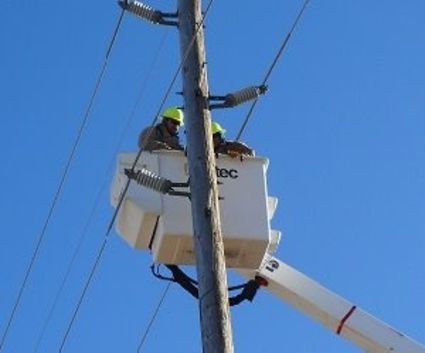 A Kimball electric crew tightens up power lines Jan. 4 that came loose in the Dec. 27 windstorm.

Tens of thousands of dollars have been saved by the city of Kimball due to efforts of the city line crew and the power plant, Mayor Keith Prunty said.

After abnormal early morning high winds on Dec. 27, an east-west power line on the south side of town whipped back and forth – slapping lines together that created hours of short, on-and-off power outages for the majority of Kimball.

None of the repair work was contracted out. It was all addressed and completed with Kimball crews, saving about $30,000 to $40,000 in repair costs had the work been contracted out, Prunty said.