AT SHOPKO, IT HURTS

Local Shoppers Sad, Worry About Cost To Shop Out Of Town 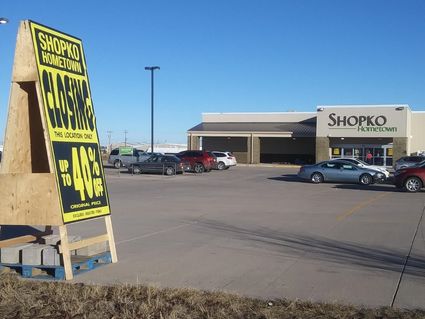 The clock is ticking at Kimball's Shopko Hometown store. If it closes as expected, some of its customers will spend more on gas to shop out of town.

Local shoppers continue filling their vehicles with items bought at Kimball's Shopko Hometown store, but they soon could be filling up with something else – more gasoline at the fuel pump -- if the store closes and they drive out of town to shop.

This idea is not going over well in Kimball.

"I'm really sad. It breaks my heart, " Toni Boos of Kimball said after shopping at Shopko this past weekend. "It's the nicest store we have without driving 100 miles roundtrip. A lot of us support this store."

As of Jan.1, 1,317 supporters signed a petition at Change.org to save the store at 1217 S. Highway 71 – one of 39 that Shopko Stores Operating Co. says it will close around the end of February due to long-term profit outlook, sales trends and potential growth.

"This isn't corporate," Boos said, referring to the company's shutdown decision. "It's hometown. That's what it says, hometown (on the store's facade). To take it away from us is really unfair."

Boos said the closing also would burden elderly shoppers unable to travel far and others from Pine Bluffs, Bushnell, Dix and Potter who use the Kimball store.

Gas spending increases would be significant for Kimball area folks who decide to shop at department stores in, say, Sidney or Scottsbluff in a post-Shopko world.

Boos is among those who have emailed Shopko corporate headquarters in Wisconsin as part of a campaign to protest the planned closing.

While Shopko reversed its decision to close a store in Stanley, N.D., such prospects appear unlikely in Kimball.

A Shopko spokeswoman in Wisconsin told the Observer in late December that the store will close the end of February. Shelves are emptying as a liquidation sale continues.

Local shoppers used words like "horrible" and "terrible" last weekend while describing their thoughts about the store's apparent fate.

"It seems to put us in a jam," said a Kimball woman, who asked not to be identified, after shopping at the store. "There's no other place in Kimball to buy the quality of things they have here without driving one and a half hours. But I don't think there's anything anyone can do to stop it."

Sam Norberg, a Kimball High graduate who lives in Washington state, shopped at the store with her nephew while visiting over the holidays.

"I definitely think it's a bad thing for the town," she said of the closing. "I lived here before there was a store like this here. It has helped bring business into town."

On Saturday afternoon, shoppers young and old, male and female, were entering and leaving the store every minute or two. About 15 or more vehicles were in the parking lot at any given time.

"I wish we could keep it open," said Shopko shopper Beth Huddleston of Kimball. "It makes it hard, especially for people who will have to go out of town to buy these kind of things. It's pretty good quality.

Some don't care, though.

One man, a Kimball retiree who asked not to be identified, said he was visiting Shopko "to see what's going on" with the liquidation sale.