Kimball Trying To Save Its Shopko 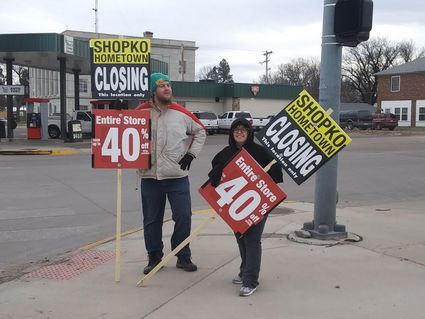 Emily Bussanich of Dix and Andrew Moore of Potter hold signs at Third and Chestnut streets in Kimball promoting the liquidation sale at the community's Shopko Hometown store that's been targeted to close.

Kimball isn't giving up its Shopko Hometown store quietly, but saving it appears to be a long shot.

An online petition urging Shopko Stores Operating Co. to keep open the store gained about 1,000 supporters in just two days last week, days after the company reversed its decision to close another Shopko Hometown outlet in Stanley, N.D., that also attracted a burst of community support. The total surpassed 1,250 by Christmas evening.

The Kimball petition joined an email campaign to save the store at 1217 S. Highway 71. Still, chances seem unlikely of changing Shopko's mind about leaving Kimball.

Michelle Hansen, public relations manager for Shopko at company headquarters in Green Bay, Wis., told The Observer on Friday that the local store "will close the end of February" following liquidation sales that began Dec. 7.

Shopko announced intentions this month to close 39 stores in 19 states due to long-term profit outlook, sales trends and potential growth, Hansen said. She said it was a difficult but necessary decision "despite al the stores' efforts."

Hansen said Shopko will help employees interested in transferring to other stores or provide severance benefits. The Kimball store employs about 16 workers.

"Shopko deeply values its employees and the communities it serves," Hansen said. "It is never an easy decision to close a location, and Shopko thanks its employees for all their support and hard work as well as its loyal customers."

In the meantime, Kimball fights the good fight.

Nicole Sanneh of Kimball started the petition Dec. 19 on the Change.org website and by late afternoon Dec. 21 the effort was within a hair of gaining 1,000 supporters.

Sanneh's petition came with this message: "Without this retail store, Kimball and surrounding area residents will have to drive 35+ miles for basic household items. So much more than the retail sales will be lost. Jobs will be lost as well as the economy."

Some are working to avoid that.

In an update to the petition, Kimball economic developer Amy Sapp wrote, "We have been in talks with building owners and Shopko representatives to work on some other solutions but having community support also will help."

Various efforts carry on for Kimball Shopko supporters to email or call Shopko corporate headquarters with pleas to save the local store. The Western Nebraska Observer has placed an ad in this Dec 27 edition with contact information for folks to do that. Similar messages appear on the Grow Kimball and Change.org websites.

But the sad probability that the local Shopko Hometown may be fading away has been evident for days in none other than downtown Kimball. There, at the busy corner of Third and Chestnut streets, motorists have been seeing Emily Bussanich of Dix and Andrew Moore of Potter hold up signs several hours a day promoting the Shopko liquidation sale. It's a paying job.

Bussanich said she didn't know about the petition to save the local store until being told about it Friday.