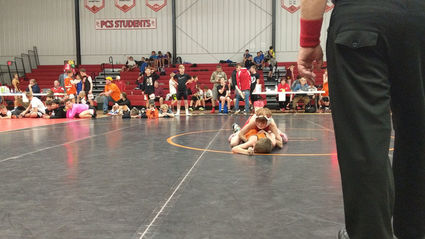 Matthew Johnson controls an opponent at the recent Junior High meet in Perkins County. Johnson earned first place in his weight division for the Longhorns.

Kimball's Matthew Johnson earned first place in the 62-72 weight bracket and 18 team points with his first round win by fall in 25 seconds over Hershey's Aden Bates. He followed up with a round two win by 7-2 decision over Garden County's Wyland Lobner and a third round win by fall in 2:26 over Kevin Dannatt of Chase County.