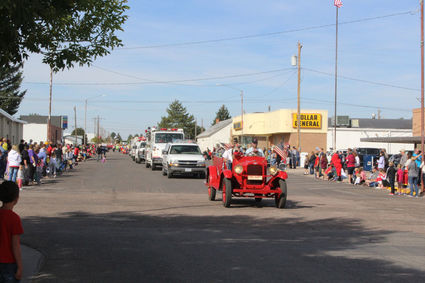 The Farmer's Day Parade was packed full of contestants and spectators on Saturday. Children raced for candy and adults enjoyed a moment to chat with friends.

Farmer's Day 2018 had many new activities to enjoy along with several familiar festivities, but one thing was missed by many – the car show.

According to committee member Assunta Nelson, the longtime chairperson for the event stepped down and no one else stepped up.

This is something that she, and the entire committee along with the community, hopes to remedy next year. Anyone interested in helping the committee is welcome and particularly if there is a specific event one wants to see.

Regardless, one thing certainly remains true. Kimball puts on a terrific parade with categories for everyone.

Winners of the parade include Mark and Marv Nelson with their Minneapolic Molin Tractor in the Farm Equipment category, the PRCA Rodeo Queens in the horses category, Sean and Makayla McNulty with their 1972 Mach 1 Mustang in the vehicle category and Stuart Tritt with Maury and Becky Schuddinck in the Adult with animal category for their Clowns NOT running for office.

The Red Knights took first place in the Motorcycles group with Dean Brosier on a 1986 Virago in second and Tom McDonald with Briar Rawlings in third on an Electroglide.

Taking first in the Organization group was the Kimball Area Foundation followed by the Carpenter Center Tumblers in second and the Kimball County Transit Service in third. 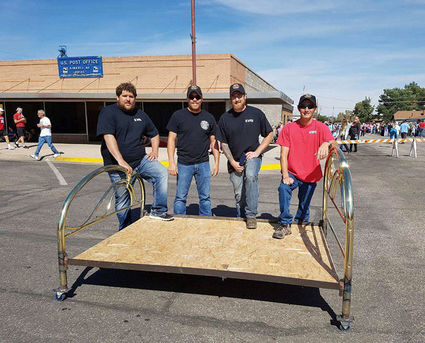 There were no entries in the Novelty or the Kids with animals groups.

These entrants, along with longtime announcers Kerry and Jeri Ferguson, the VFW Post #2243, Kimball Volunteer Fire Department and all the other entries, made the parade a huge success this year.