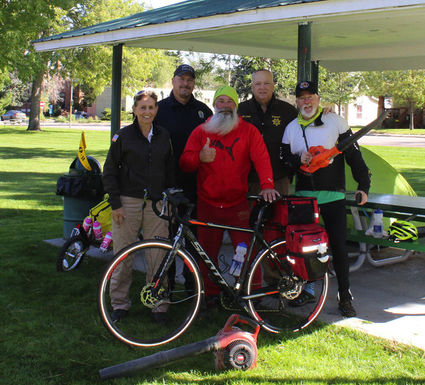 Bob and Rusty stand with the leaf blowers they used to dry their gear after a wet morning in Kimball's City Park. They were joined by Kimball law enforcement, from left, KCSO Chief Deputy Marla Knigge, Chief of KPD Andy Bremer, Bob, Sheriff Harry Gillway and Rusty.

Bob Quick isn't afraid to live, in 14 years he was been dead twice, once for 3.5 minutes and once for 22 minutes.

Bob has had 27 heart procedures, 19 stents and now has an ICD in his chest that doctors use to track him. He is a heart disease survivor who has also survived a stroke.

"Everything says I should not be here. They told me I would never get on a bike again, but look, I'm on it," Bob said. "If it wasn't for guys just like your sheriff, your police chief, your paramedics and fire department, I wouldn't be here. I would have never got to hold my grandson."

Bob has found a way to show...