Lady Horns show no back-down after tough week of competition 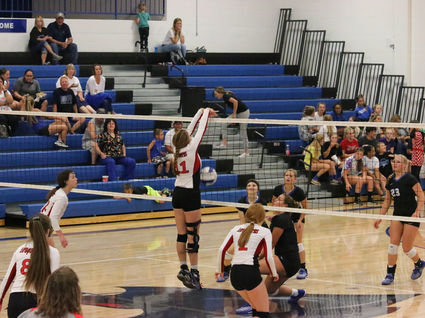 Maddie Wynne gets above to net to drop a surprise down on the Hershey court.

Coming into last week with a record of 5-7 the Lady Longhorns were facing a long week playing first, the C1 team from Hershey who was 8-7 on Tuesday, and then on Thursday hosting two tough local Class B schools, Sidney and Gering.

The start of the week playing Hershey in set #1 was a very close score of 23-25, just dropping it by two points. Hoping to conquer the next 2 sets, the girls fell to the Panthers 8-25 and 12-25. Unofficial stats show an even showing of the girls' stats with Kate Reader leading with six kills, Jenna Greenwood with five, Jaydin Paxton two, and Sydney Biesecker with...