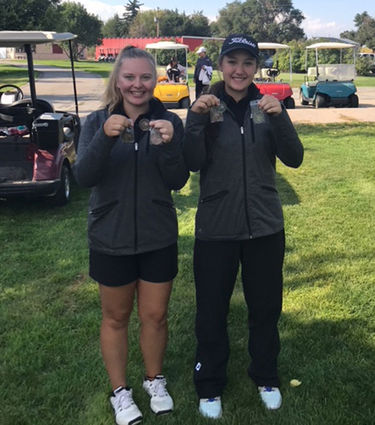 Carli Wurdeman,left and Payton Wise, right, hold their Western Trails Conference and Bridgeport Invitational medals they earned this past week. Payton finished runner-up in both divisions for 2nd place silver medals while Carli finished 6th in the top ten medal group of both divisions with her round of 100. By finishing in the top ten medal group both girls earned All Conference honors. The Kimball team also finished 3rd with all team members receiving medals for that accomplishment as well.

The Kimball High Girl's Golf Team took part int two tournaments this past week with both good news, and not so good results, to report. At the Ogallala Tournament on Tuesday, the Lady Longhorns finished a distant 10th in the team standings as they were in a field of several large schools. North Platte won top team honors with 351 followed by Gering with 360, Scottsbluff 367, Ogallala 371, Mitchell 388, Cozad 399, Sidney 404, Chadron 410, Alliance 430, Kimball 449, Ogallala JV 497, Dundy County/Stratton 503, Perkins County 538, Lexington 549, Creek Valley 551, Bayard 581.