A bad day for Kimball golfers at Gering tournament 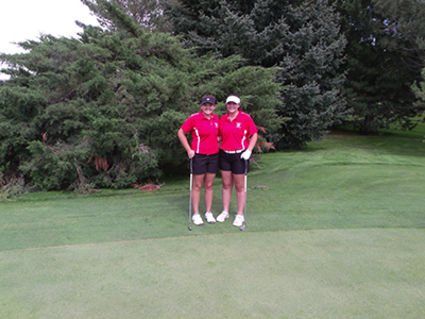 Lacey Klinkhammer and Sheridan Magninie, two new-comers to the Kimball girl's golf program this season, are the two seniors on the team and have taken on the role of leaders and are enjoying the sport.

"Not a good day today" is the way cach Luke Maas described his Kimball girl's last outing at the Gering Golf Tournament. "We just didn't have it today" Maas said. Gering won their own event with a good score of 339 with Scottsbluff runnerup with 349, Mitchell shot 373, Gordon-Rushville 383, Ogallala 391, Sidney 408, Bridgeport 417, Chadron 419, KIMBALL 439, Scottsbluff JV 443, Alliance 476. Mitchell's Kenzey Kanno was medalist with a sparkling round of 71. No one in the top ten medal group for Kimball as Payton Wise shot her high round of the season for Kimball's low score of 102. Carl...