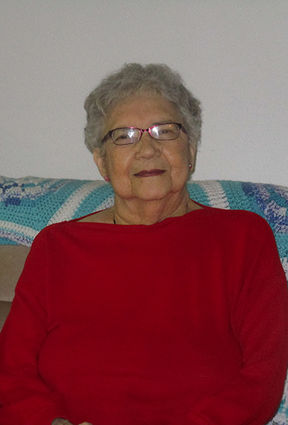 Leah Joan Hof (Joan), 80, of Kimball, died at the Kimball County Manor on Wednesday, August 1, 2018. Funeral services for Joan will be held at 11:30 a.m. on Friday, August 10, 2018 at the Cantrell Funeral Home in Kimball with Pastor Mel Daves officiating. Burial will be held in the Peetz Cemetery in Peetz, Colorado at 3:30 p.m. Visitation will be held from 1:00 until 6:00 p.m. on Thursday at the funeral home. Friends may visit http://www.cantrellfh.com to view the obituary and leave condolences for the family. Memorials may be given to the family. The services for Joan have been entrusted to the Cantrell Funeral Home.

Leah Joan Hof was born in Walsenburg, Colorado on June 20, 1938, the daughter of Joseph and Mary (Coghlan) Coots. She graduated from Englewood High School, Englewood, CO in 1956. She worked for Bell Telephone as a clerk. She met James Hof at a square dance and they were married on April 11, 1958 in Denver and they lived in the Denver Metro Area until 1979 when they moved to Potter. Joan was a bookkeeper most of her adult life- working at a large radio station in Denver for many years. Later she worked for local companies, The Egging Company, KSID Radio, GRI, Sidney Telegraph and then was the village clerk in Peetz, Colorado until her retirement in 2010. She moved to Kimball in 2011 after the death of her husband, so she could be closer to her children. Joan was a strong Christian and her faith was an inspiration to many. Joan loved her family and they were extremely important to her. You could always find her busy with a craft project and she loved making crafts for her family and friends. She was an enthusiastic fan of the Denver Broncos as well as the Nebraska Huskers.