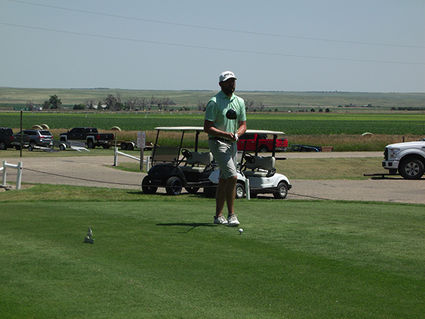 Tony Robinson gets ready to take his tee shot from the silver tees on hole number one.

The 2018 Vince's Corner A-B-C-D Double Draw Golf Scramble was held this past weekend at the Four Winds Golf Course and it was a "Hot Time" for the 124 golfers involved as the temperatures rose to the upper 90s both days. Henry Heeg, owner of Vince's Corner, and his staff of volunteer helpers, made sure all golfers were taken care of, as far as, refreshments to keep them cool and refreshed.

Some red hot golf was also played, according to the scorecards turned in. There were 31 four-person teams involved as the entires were shut down at this figure with a waiting list in case anyone dropped...