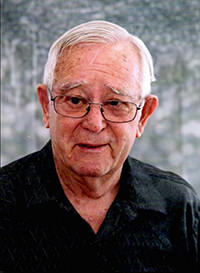 Larry D. Muhr, 83, of Kimball, died at the Kimball County Manor with his daughter, who was his best hunting buddy, by his side on Wednesday, May 30, 2018. Memorial services will be held at the First Baptist Church at 2:00 p.m. on Friday, June 8, 2018 with Pastor Mel Daves officiating. Inurnment will be held at a later date in the Chalk Creek Cemetery in Banner County, a mile from where he grew up. Friends may visit http://www.cantrellfh.com to view Larry's Tribute Wall and leave condolences and stories for the family. Memorials may be given to the Joshua Norberg Memorial Agriculture Scholarship for Kimball County High School Graduates in care of the family or Kimball Co. High School for the scholarship. The services for Larry have been entrusted to the Cantrell Funeral Home.

Larry Dean Muhr was born August 17, 1935 to Cecyl and Julia (Tinsley) Muhr at Scottsbluff, NE, their 4th of ten children and two adopted grandchildren. He attended school in Banner County and graduated with the Class of 1953. In 1957 he joined the National Guard- Gering, serving 7 years. He also attended Officers Candidate School. On June 15, 1958 he married Cherie Benson in Scottsbluff, NE. They had two children, Lorri Dee born August 17, 1959, on his birthday, and Corey Cecyl born February 10, 1964. Larry farmed and ranched with his father for a time. In 1964 he started work for Schaffert Hereford Ranch at Dalton and moved with them to Alliance, NE. In June 1970 Larry and family moved to Kimball, NE where he worked for the Kimball County Grain Elevator, and later became branch manager. After he retired from the elevator, he worked for Western Office Supply and Kimball County Schools, retiring a second time in 2005. Larry grew up attending Camp Rock Sunday School at Redington. He served as Superintendent and teacher and was always ready to help on work days. He enjoyed helping with 4-H when his children participated, especially with the horses. He grew up around horses and had a gentle way with breaking them to ride. Well, most of them. He had a few that didn't care for his gentle ways and threw him off, leading to a few aches and pains when he was older. Larry enjoyed fishing, hunting, camping, leather work, playing cards and square dancing. He enjoyed being outside, especially riding horses or hunting with Lorri. Larry and Betty (Vencill Schindler) were married February 22, 1986. Betty passed away February 4, 2002. On November 22, 2005, Larry and Evelyn (Cooley) were married in Scottsbluff, NE. Larry moved to Scottsbluff where he resided till Evie passed away August 16, 2015. He returned to Kimball where he resided at Vista Villa until moving to the Manor.