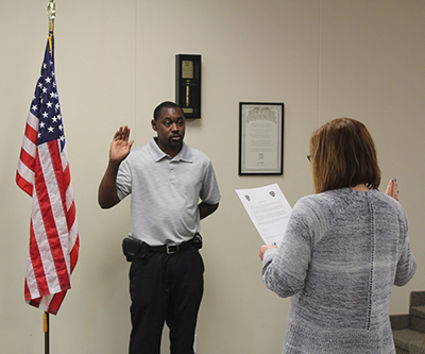 Henderson Bryson was sworn in as the new City of Kimball Police Officer last Tuesday, May 22 in the City Hall Chambers.

"Be the change you wish to see in the world," a quote from Mahatma Gandhi, rings true to many, but Officer Henderson Bryson's story lives out this positive outlook.

Born and raised in Detroit, Mich., Bryson was in the foster care system for many years, bouncing around to different homes and families.

Despite, and perhaps because of, his tough back story, Bryson made believers out of many fellow graduates of Henry Ford High School in Detroit before moving on to become a Captain in the Marine Corps, from 1995-97. He followed that with six years of service as a reservist.