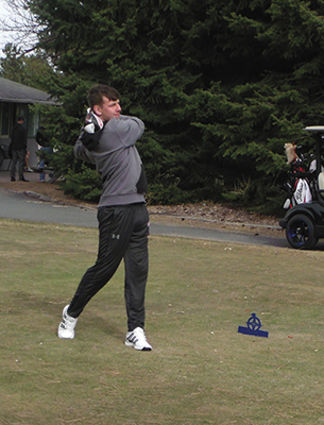 Kimball Senior, Kole Bush, captured 3rd place at Monday's Scottsbluff tournament with his round of 86.

The Kimball High Boy's Golf Team picked up their fourth team championship of the season by winning the Division Two title at the Scottsbluff Tournament held Monday at the Scottsbluff Country Club course. On a breezy day, with the greens rolling fast, Kimball shot a 358 team score to win over the 10-team field. Chadron was runner-up with 390, followed by Morrill with 402, Alliance JV 412, Mitchell 420, Scottsbluff JV 424, Kimball JV 441, Ogallala 444, Mitchell JV 445 and Bayard 462.

Scoring for the Kimball JV were Kole Bush with his round of 86 that earned him the 3rd place medal, Jaren Winstrom 103, Jacob Walker 135 and Cole Henton 117.

Although the scores were a bit higher than usual, Coach Chad Wise again commented, "The weather was not that bad, but a little breezy. This is a tough course and the greens were much smoother and faster than we have seen this year. We will take the win and all of our golfers bringing home medals was a positive."

A busy weekend for the Longhorns with back-to-back conference tournaments. On Friday, they play at the Rivers Edge course in North Platte in the SPVA Conference and Saturday it is back to Morrill for the Western Trails Conference Tournament with starting tee time both days set for 9 a.m.

The Kimball High Boy's Golf Team won their third consecutive team title of the season at the Morrill Tournament this past week, but then saw their streak end with a runner-up finish at the Chase County Tournament held at the Enders Golf course.

Eric Stevens of Bridgeport was medalist of the day with his round of 73. Kimball's Dillon Wise was runner-up for medalist honors with his round of 76. All five Kimball golfers finished in the top ten medal group with Andrew McCloud 3rd at 79, Izaac Reuter 7th with 83, Zane Anthony 8th with 84 and Brendan Walker 9th with 84.

The Horns saw their win streak end at the Chase County Invite when Perkins County took the team championship with a round of 353 with Kimball runner-up with 370. A 370 score is way high for Kimball, but Coach Chad Wise said, "This was the worst weather I have ever been involved with a golf tournament. The winds were pretty steady at around 50 miles per hour and gusting to 70. It was very cold, and it also was the first time any of us had seen the golf course." 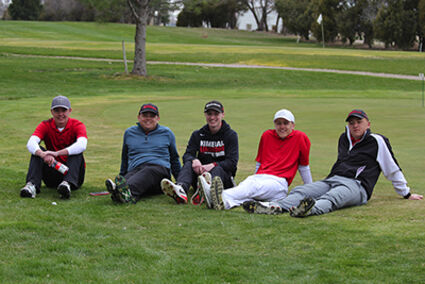 All the individual scores were also very high, with the medalist being the number 5 golfer from McCook, Michaelis Malson, shooting a winning round of 84. Kimball's Dillon Wise was runner-up for 2nd place honors with his round of 86. Zane Anthony was 5th with 88. Izaac Reuter was 13th with 98, Brendan Walker 14th with 98, and Andrew McCloud 15th with 99.

Kimball was back in action this past Monday at the Scottsbluff Tournament and, according to the schedule, have a busy weekend ahead of them, playing in the SPVA Tournament in North Platte this Friday (April 27) and in the WTC Conference Tournament back in Morrill on Saturday (April 28). Start time both days is 9 a.m. The Kimball Invitation Tournament is coming up May 3rd.