Kimball High boys golf team should be on top again 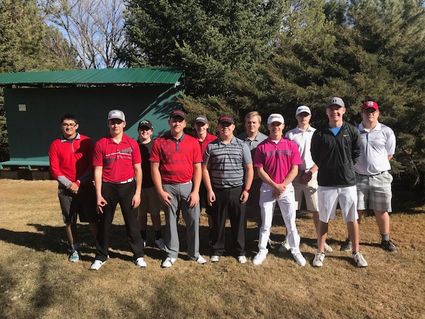 After last year's exceptional season, what might we expect from this year's Kimball High Boy's Golf Team? You might remember that last year they swept through the season with 8 consecutive wins before having to settle for runnerup honors at the State Tournament. They won both the Western Trails Conference and SPVA Tournaments, and the District Tournament, and their only loss was to Lincoln Lutheran, by 9 strokes, in the two-day State Tournament. They brought home the State Runnerup Trophy and had 3 players finish in the top 15 medal group.

With all but one of their varsity players returning, we can expect another outstanding season for the Kimball boys. However, that one player who is not returning, graduated-Jordan Greenwood will be sorely missed. Jordon finished out his four years as Kimball's first ever four year state medalist! I think it is safe to say his credentials will list him as Kimball High's best ever! Last year, Jordan was an 8 event medal winner taking medalist honors 3 times and finishing with a tie for 3rd place at the State Meet. For certain, the number one golfer spot he filled last season, will be hard to fill, but it can be done from the returning group. Jordan will be watching and cheering from the sidelines as he continues his golf at the college level as a member of the Southeast Community College team in Beatrice, Nebraska.

Coach Wise has 12 golfers checked out, including the 4 mentioned. Others seniors are Kole Bush, who could easily step into one of those varsity roles as Wise said, "Kole is looking very good in the short time we have had to practice this spring." Weston Walker is the other senior, but is new to the game. Jaren Winstrom and Jacob Walker are juniors who have been with the program and work hard at their game. Brendan Walker is a talented sophomore and Ethan Greenwood is another sophomore who comes from that golfing family. The two freshman who are new to the program are Jesse Heide and Cole Henton. Henton turned some heads with his play in last year's summer programs.

About the only way the team could improve on last year's record is to win one more tournament, and that is possible. As for goals, Coach Wise said, "We are going to really work on improving our game from 100 yards in." The schedule seems to change from day-to-day. Already, the opening tournament at Chase County, set for March 29, has been post-poned, but a dual at Gering was added for March 27th. It looks like the next tournament will be at Mitchell, April 10th.