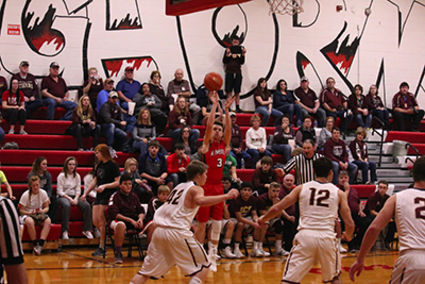 Colton Mielke takes a shot earlier in the season. Mielke opened the final game of this season with a trey. The Longhorns ended their season with a loss to Bridgeport last week.

The season ended for the Kimball High boy's basketball team with a 57-46 loss to Bridgeport in sub-district tournament play, closing out their year with a record of 4 wins and 16 losses. Bridgeport advanced to the district playoff by virtue of a win over Bayard in the sub-district finals and then lost a heart-breaker, 43-42, to Perkins County in the District playoff.

Kimball opened the game with a three pointer by Colton Mielke, but had a poor night shooting after that opening trey. They trailed 11-5 after the first period and were down 23-19 at half-time, thanks in large part to a 9 point second quarter by sophomore, Brendan Walker, who had 11 points by half-time.

The Horns hit 4 treys in the third quarter, with Walker netting 2 of the 4, along with 1 each by Izaac Reuter and Brady Kilgore. Kimball outscored the Bulldogs 16-14 in the third quarter to trail 37-35 heading into the fourth quarter. The Kimball boys have had a hard time all season finishing out, and once again, they faltered in the final period, as the Dogs outscored the Horns 20-11 to secure the win.

It was a night of long-range shooting, with Kimball hitting 9 treys and Bridgeport 7. Walker took game scoring honors with his 20 points, including 4 treys. Walker shot 47% from the field on the night and was 4 of 7 on 3 pointers for 57%. He also tied for rebound honors with 5, along with Reuter, and had 2 steals to share honors with Zane Anthony, who also hawked two take aways.

Reuter had a big third quarter for the Horns, scoring 7 points and ended with 13, including 3 treys. Kilgore had 7 points with 2 treys. Mielke had 3, Anthony 2 and Kole Bush 1, to round out Kimball scoring.

A big night for Bridgeport senior, Eric Stevens, as the 6'5" sharp-shooter tallied 19 points and had 5 treys. He also played big inside with 11 rebounds. Logan Nichols hit double figures with 14, as did Kaleb Lussetto with 2 treys.

A disappointing season, record-wise, for Kimball, but with only one senior in Kole Bush, the Horns return a lot of experience, and the sophomore class has lots of potential and will push the returning juniors for those varsity spots, as they have displayed the ability to shoot the basketball well, and play well together. Next season could prove to be a turn-around season for Coach Luke Dea and his boys.