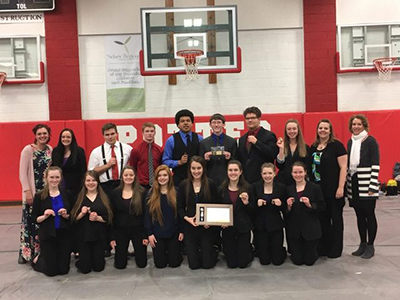 Pictured at left is the 2017-18 Potter-Dix Speech Team. The team has won the MAC Conference for nearly 30 consecutive years!

"People, and even the students, don't really know the time and dedication it takes to be successful at speech. It's just like practicing and performing for any sport," head coach Chandell Oleson said. "The skills these students learn in speech will be utilized for the rest of their lives."

Oleson, with assistant coaches Kristin Kasten and Evelyn Hornbarger, works with a team of 15 students at least three times each week, and their work paid off when each Potter-Dix team member placed at MAC.

With the exception of 2015-16, the Potter-Dix team has won the MAC conference for more than 30 consecutive years, according to Oleson, who began as an assistant coach in 2013 and became the head coach in 2016.

The Potter-Dix team earned a total of 141 points on the day followed by Leyton with 104, South Platte with 86, Garden County with 71, Bayard with 42, Creek Valley with 29, Minatare with 23 and Banner County with 10.