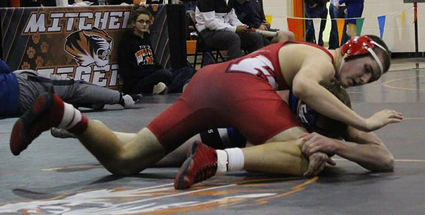 Stephen Bateman controls an opponent during the Mitchell Invite last week. Bateman did not end up placing, but was able to avenge a loss from earlier in the season.

A good effort by the Kimball High Wrestlers as they had four wrestlers finish in the medal grouping led by senior Garrett Pedersen's championship at 126 pounds, with the Horns finishing 6th in the team standings of the 12 school field.

Bridgeport was the team champion with 176.5 points, edging out Mitchell with 158 and Morrill with 125. Kimball scored 59 points to finish in the upper half of the team standings. Coach Wade Brashear said, "We wrestled well, although the overall number of participants was down. Garrett Pedersen took first at 126 pounds, earring a big win over a district opp...