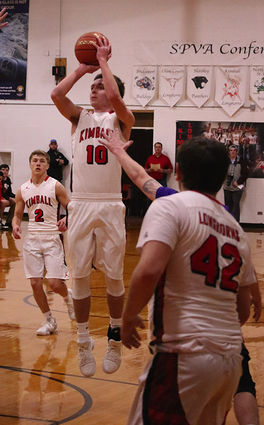 Izaac Reuter fires a shot off during the Kimball/Bridgeport game.

The Kimball Boys suffered a pair of losses on the home court over the weekend, losing to Bridgeport 56-41 Friday night and falling to Gordon-Rushville 47-26 on Saturday.

A taller Bridgeport club with outside talent to go with their height, gave Kimball an early 3-0 lead, but soon took control and never looked back as they dominated despite hard play by the Horns. The visiting Bulldogs had 9 players score with point guard Kaleb Lussetto high with 19 points, including 3 treys. Drake DeMasters, one