Lone Wildcat wrestler prepares for his first year on mats 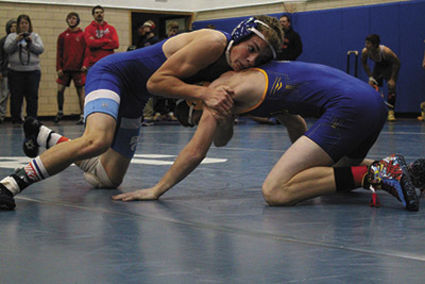 Deven Sullivan controls an opponent in his first home meet on the Banner County wrestling team. In this, Deven's first year, he is the sole grappler for the Wildcats. While one-on-one coaching time is enviable, the lack of teammates makes practicing moves difficult.

Sullivan, wrestling at 145, practices every weekday after school, according to Gifford, but practices look a bit different with just one grappler.

"Practices contain a lot of technique and drilling without live wrestling," Gifford said. "Conditioning is a big part of the practice."

While Sullivan will benefit from a lot of one-on-one time with Gifford, who brings 18 years coaching experience to the mats, there are few other pros to practicing solo.