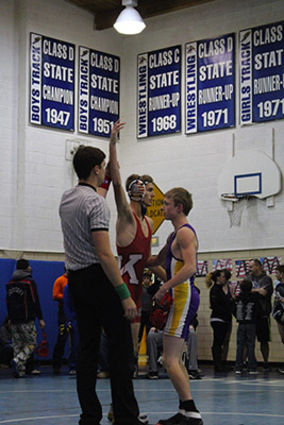 Garrett Pedersen's hand is raised as he is named the top wrestler at the Banner County Tournament on Saturday, Dec. 9

Kimball High senior, Garrett Pedersen, had a career best day this past Saturday, as he captured the championship of the 120 point weight class at the Banner County Invitational Wrestling Tournament. Pedersen ran his season record to 8-2 as he wrestled his way through the bracket winning all five matches he was involved with and had 4 pins and a major decision to his credit. His fastest pin on the day was a fourteen second fall over Keim of Bridgeport. In the championship match, he won a 12-3 decision from his Kimball High teammate, Jordan Cluff, and leaving Kimball with the top two spots in...