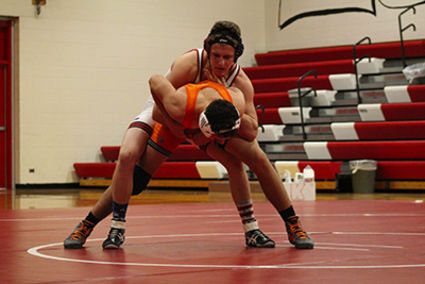 The 2017-18 Wrestling Season is underway for the Kimball High Longhorns. They opened up with a home dual with Bayard on the final day of November and despite the losing score of 40-5, Coach Wade Brashear saw some good wrestling from some of his limited squad. The Tigers won 4 matches by forfeit as Kimball could not fill the weight classes. The Horns could put only 5 wrestlers on the mats against Bayard and their lone win on the evening was by Jordan Cluff at 120 with a technical fall over Hunter Kildow 18-2 at 120 pounds.

At 126 senior Garrett Pedersen took highly touted Alex Araujo into overtime before losing 9-7 by sudden victory. It was really a solid opening match for Pedersen who is looking for a return trip to the State Tournament in his final season with the Horns.

Jaden Mohr at 138 lost a 15-2 major decision to state ranked Mitch McKibbin but the score is not indicative of how well Mohr performed either. At 152 Ethan Ratzlaff, shown left, lost 7-2 to Leonard of Bayard, and at 285 Stephen Bateman lost by pin to Jones.

Kimball took part in the Chuck Anand Invitational in Akron, Colorado this past Saturday and according to coach Brashear, "We wrestled pretty well for our first tournament. I believe this was the most team points we have scored in Akron, and with only 6 wrestlers" he said.

Jordan Cluff has a record of 3-1with 3 pins wrestling at 120. Connor Cluff, also wrestling at 120, was 2-2 and placed 4th, with Jordan ending up in 2nd place, Garrett Pedersen also finished 2nd with a 3-1 record at the 126 pound weight class. Jaden Mohr had a 2 win 2 loss day at 138 but failed to place. Ethan Ratzlaff and Stephen Bateman both went 1-2 on the day and did not place, but to their credit, all Kimball wrestlers had wins!

"We will continue to improve on technique, conditioning, and aggression" said coach Brashear. "There will be many more tough matches to come, including at the Banner County Invitational this Saturday" said Brashear. Wrestling at Harrisburg on Saturday will begin at 9:30 am.