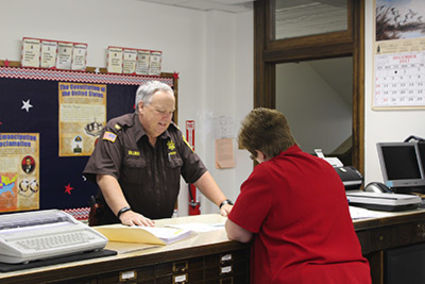 Kimball County Clerk, Cathy Sibal, and the entire county clerk's office began one of their busiest seasons last Friday, Dec. 1. It's not Christmas, it's filing season.

The clerk began accepting filings for public office last Friday and also notified the City of Kimball, the villages of Dix and Bushnell, the school district, ESU 13, the airport authority and South Platte Natural Resources District, that it is time for them to certify which positions are up this coming election year.

According to Deputy Clerk Josie Morgan, the sub-districts each complete their information including current office holders, term length, when the term ends and the annual salary, which is used to calculate filing costs.

"That is a lot of information coming in at once, so we do not try to figure all of that out ourselves," Sibal said.

Sibal added that some of the incumbent information could be gleaned from the last election results, however, in some cases, an appointed offical will replace an elected one if the elected offical cannot complete a full term for any reason.

"We don't have term limits," she added.

The season officially opens based on the election calendar, set forth by the Secretary of State, according to Sibal, and that calendar is used for each step of the lengthy election process.

The process is the same for city, village and county candidates with the exception of partisan/non-partisan offices, as all county offices are partisan, or "of party." Additionally, a candidate cannot change his or her political party affiliation after Dec. 1 and still file for a partisan office.

Incumbents, those who currently hold office, and non-incumbents in Kimball County and the City of Kimball can begin filing at any time but incumbents must file by Feb. 15, while non-incumbents have until March 1 to do so.

In order to file, candidates must live within the city or county limits, depending on the position, file accountability and disclosure forms and, for many offices, additional documentation is required. For instance, anyone filing to run for the Kimball County Sheriff must have a law enforcement certificate and a surveyor must be certified.

Commissioners, once elected by district, are now elected at large. This means that a candidate can live anywhere within Kimball County and serve.

"We will have you verify that the information on your voter registration is correct," Sibal said. "We will also need the necessary documentation for assessor, sheriff and attorney at the time of filing."

Filing fees, which are not refundable, differ for each office and is calculated at one percent of the annual salary for the position.

Finally, Sibal urges citizens to make sure they vote partisan, as voters can always return to the clerk's office following the primary election, in May, to return their status to non-partisan.

"I would like to stress, again, that the primary election is for the parties to nominate their candidates to go forward to the general election," Sibal said. "Those (primary) votes are so important for the candidates who share a party."

Election filing forms are available in the County Clerk's Office for local, county, state and national offices. This is where any candidate will file and pay the filing fee.