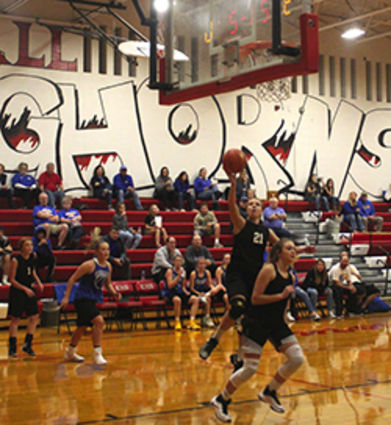 Kimball's Alex Reader (21) goes up for a shot during the Lady Horns scrimmage against Gering on Monday, Nov. 27.

The Kimball Longhorns got the basketball season underway Monday evening with a practice scrimmage with the Gering girls and boys. The Nebraska School Activities Association allows all Nebraska High Schools to hold an early game with any selected opponent with the proceeds to go towards helping fund the Nebraska State Hall of Fame. Kimball and Gering went against each other last year at the Gering site.

Most schools elect to play the game like a regulation contest but at Gering's request, the Kimball-Gering matchup is played more like a practice, complete with practice jerseys and no number...