Walking to raise awareness and funds 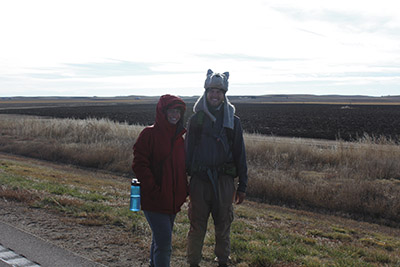 That is how far two young people are walking to raise awareness for suicide prevention and raise funds for the Make-A-Wish – Oregon Foundation.

Amanda Autrey and Kolton Rackham lived in Utah and traveled to Georgia with just $145 and a few essential items. They will end their adventure on the coast of Oregon.

She chose the Make-A-Wish Foundation after they had decided on a cross country trek. When researching all the worthy causes, Amanda learned that the foundation doesn't just provide once-in-a-lifetime experiences for children battling terminal diseases, but also for those who may recover.

The cause spoke to her and so she made it her own. Additionally, they are raising awareness for suicide prevention, something she has a personal connection to.

She began researching ways to heal, holistically and thus became a holistic healer with a focus on energy. She travels with her partner, Kolton, who is a mentor. While they journey they share their gifts with others and have faith that their needs will be met.

"Everybody wants happiness, safety and health but there are infinite ways to get there," Kolton said.

Along the way they have learned more about themselves and others. This journey is meant to not only help others, but as a jump start for the couple upon the completion of the trip. They plan to live, work, play and help others in Oregon and will set their home up there.

"I have seen that the body is designed to heal itself. When we are out on the road we don't have distractions, so we are learning to confront struggles," she said. We want everyone to know that there is hope, and we want to show people that no matter what your past looks like, you can overcome."

They began their journey on May 1, more than six months ago, from Tybee Island off the Georgia coast, having never made a journey similar to this.

On the first day they experienced struggles and with hearts full of faith, they continued on. They learned quickly to be grateful for the demands facing them, as each time they overcame an obstacle, they felt more prepared for the next.

Georgia was a tough state, Amanda said. As the first state they crossed, it was full of learning experiences.

Since then they have battled ticks, heat, sunburn and emotional struggles. Tools Kolton learned as a mentor have helped and Amanda continues to use her tools to remain happy and healthy.

Nebraska has also been difficult, according to Amanda, as summer turned to fall and the weather begins to change, the pair have new struggles on their minds.

"I think, too, that this is the first state that I can turn around and see ten miles back," she said. "It seems that we have gone so far and but I look back and can still see the bridge we crossed back there."

Then, as they crossed into Nebraska they learned that Amanda is pregnant. Now, as they prepare to enter Wyoming, in the winter, there is that new aspect to their journey as well.

They have yet to acquire a sponsor for gear, but with 554,040 likes on their Facebook page, Amanda is confident that a sporting company would benefit from their story and a partnership in their journey.

Many have expressed concern about their continued dedication to their walk, particularly now, but Amanda and Kolton have decided to continue unless their health or safety is compromised.

So, they move forward, into the wild western state of Wyoming, much in the same way they began this adventure, full of gratitude and faith and with a message of health, happiness and well being.

Donations for their trek can be made on their GoFundMe page and they encourage others to track their progress, and donate to their worthy causes, on Facebook at 2918 miles or the website http://www.2918miles.com.