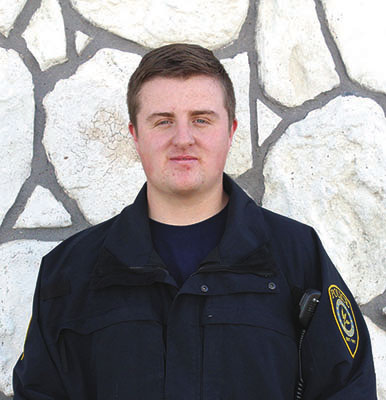 Mahlon Gingerich, grew up in Dix, working with his father, Sam, in the tree business. During high school Gingerich attended and played football for Potter-Dix. Graduating in 2014 he decided to join the Kimball Ambulance Service, the Dix Volunteer Fire Department, as well the Army National Guard, he attended basic training that same year.

In 2015 he became an EMT for Kimball and still is today. As if he wasn't already busy enough Gingerich became a member of the Laramie County Volunteer Fire District One of Cheyenne, Wyo., in Jan. of this year.

In the National Guard, Gingerich's first job was as an 88M Truck Driver for over two years. His real career interest in the military was becoming a 31B, a Military Police Officer. With that dream in mind, Gingerich just completed Basic Training to officially become a 31B. Being Law Enforcement in both the civilian and military worlds, Gingerich believes both careers will aid him in the future and be improved in both career paths.

In addition to the new 31B career, Gingerich is sure that his EMT and Fire training will help with the adjustment to the KPD, "I have been able to experience a small portion of Law Enforcement life as an EMT and as a Volunteer Fireman."

If you can't tell by Gingerich's lengthy resume list, he genuinely enjoys helping and assisting everyone. "I have always wanted to be a cop, ever since I was little. The timing was right and everything fell into place. I just want to be here to help people in whatever way I can."

Gingerich is truly excited about his new career that he began on Monday, "I have been bugging Chief for a long time about a job opening, and have asked him many times to go on ride-alongs," added Gingerich. "I, of course, know Andy and Dwain pretty well, but I am looking forward to getting more acquainted and working with the other officers."

A great characteristic that Gingerich brings to the KPD is that he has been a part of the Ambulance Service for some time, "you know most of the time the PD is on the scene before the ambulance is, I can help get vitals, oxygen or other things the person might need before the EMTs get there."

Gingerich is very thankful to have grown up in such a great community, "Kimball County is a great place to grow up, and to stick around in, it's the small town atmosphere I like."

"Everyday leads to something different, it's up to us to solve those problems and get home safely. I am ready for all the new challenges."

"The KPD is honored to have Mahlon and I look forward to helping him learn his new career and grow as a police officer," added Chief Andy Bremer.